What is the development history of the Aluminum Extrusion?

Aluminum extrusions are used in multiple aspects of our daily life. From our transportation means like automobiles to the buildings we reside in or work in, some sort of extruded aluminum can be found. Then you may raise some questions: where did the aluminum extrusion come from? When was the extrusion process commence? How did it come to affect our daily life? Let’s explore together for the answers to these questions in the following articles.

The development of this process follows the work of Joseph Brahma, who first patented the method of extruding lead in 1797. His process involved preheating metal and manually forcing it through a die with a hand-driven plunger. This lead extrusion was accomplished by forcing a pre-heated billet through a die by using a hand press. The manually powered process was the standard until the invention of the first hydraulic press by Thomas Burr in 1820 who constructed the first hydraulic powered press which played an important role in the fabrication process. This hydraulic press is the same kind used in mass production today. In 1894 the modern hot extrusion process was invented by Alexander Dick. The extrusion (or as it was called then, squirting) process and was further developed, allowing for the processing of other non-ferrous alloys such as copper and brass. And aluminum would come into the picture in the 20th century. 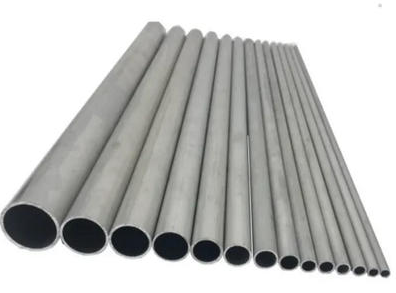 Aluminum was first discovered in 1807 but wasn't refined successfully until 1825. When it was first discovered and refined, it was considered a precious metal which was even more valuable than gold. It wouldn't be until the end of the 19th century when the smelting process was invented by Charles Martin Hall and Paul Héroult and commercial production was developed but aluminum was yet a relatively rare product.

Not until the hot extrusion process is invented in 1894 by Alexander Dick is aluminum extrusion put into operation. The first aluminum extrusion press was created in Pennsylvania in 1904 which resulted in a rapid increase of applications for aluminum in both the automotive and construction industries, where the demand for extruded aluminum reached its peak during the two world wars with the manufacturing of aircraft and other military applications.

Then the extrusion process marched into the transport sector, where its relatively high initial cost is counterbalanced by savings in operating costs. The uses for extruded aluminum continued to expand after World War II and began to move beyond just industrial and automotive applications. It was quickly introduced into the now growing residential housing market due to the increase in wealth after WWII. The notable development focuses on the booming residential housing sector, where extruded aluminum channels and other continuous products are today still the staple products. Even the staples that you use to hold together multiple pages of a report is extruded aluminum.

Due to its excellent properties, aluminum has been widely used in the extrusion process, and the metal has seen exponential growth in development, thus continuing to revolutionize the way we live. There is an evident conclusion that aluminum extrusion will continue to play an important part in our lives now, and in the future.

Wuxi gold guangyuan metal products factory has over 10 years experiences in aluminum processing and manufacturing. We provide various styles of aluminum extrusion tube in different sizes of excellent quality at reasonable price. We pledge to offer you products customized for your needs. Please feel free to contact us!